The iPad deployment adventure continues. I was very excited when I managed to get the network settings to each iPad through the iPhone Configuration Tool (see my last post).

Next it was on to naming each iPad in the cart. It was getting a bit frustrating to see 20 iPads named ipad show up on iTunes. So, I figured I would unplug all and add them one at a time. When an iPad shows up in iTunes, the following screen appears: 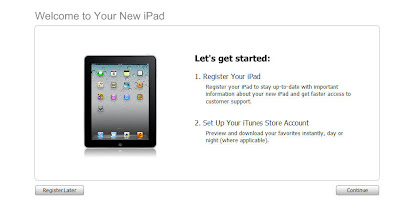 I chose set up as new iPad and then Continue, prompting... 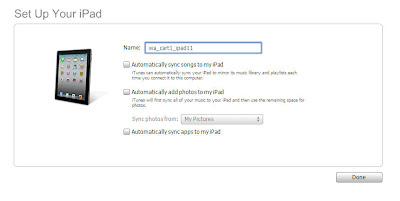 Here, I unchecked the Automatically sync songs and automatically sync apps checkboxes, leaving all three unchecked and I named the iPad based on our naming convention. Right now we only have 1 cart, so I will consider this cart 1, but wanted to leave room in our naming for the future when we have more carts so that there will be no questions regarding how to name those.

After clicking done, the following up:

Being that the iPads did not have iOS5, this screen prompted us to Update. It seemed as though any iPads that had already been changed in any way since we received them wanted to be backed up, while the others just updated.

The process took some time as I had to do them one at a time. Each time one was finished, I would plug in the next one so that it would show up with the name ipad and once completed join the crowd of newly updated iPads with the spiffy iOS5 and the nifty new name.

Next up ... Volume purchasing of apps and using the iPhone Configuration tool to get the apps to all of the iPads in the cart.
Posted by Games and Learning at 3:40 PM

Let me know how it goes with deploying all the apps to the iPads in the cart. Were you able to do it easily with the iPhone Configuration Tool, or did you have to update them one at a time. Our school just got a cart of 20 and we will soon be going through this same process. Thanks for all the tutorials thus far.

As far as I can tell, it seems like the only way to do it is 1 at a time. However, seeing all the iPads show up and accessible from one PC (or preferably Mac - not in my case :( ) helps. Still a lot of clicking and waiting required.